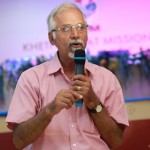 There are hardly any words to describe the grief and great sense of loss that the entire community of organic farming/ecological agriculture movement in India is experiencing after hearing the news of the sudden and tragic demise of Dr O P Rupela, a friend and guide to hundreds in the movement.

In ASHA (Alliance for Sustainable & Holistic Agriculture), we remember him as a strong supporter in most of our endeavours. Whether it was a high-profile conference or a closed door lobbying meeting, or action research in farmers’ fields or reviewing a book being prepared, or giving his inputs in designing and implementation of a research study, or training a group of farmers or NGO frontline workers, there was not a single time when Dr Rupela turned us down on any request from our side. He would somehow make time, make meticulous preparations, share his material beforehand and collect feedback and be crisp and clear in his communication. This applied to how he approached trainings that he would give to farmers too. He would prepare his presentations carefully and explain every graph and figure in a simple manner so that the importance of the content of his presentation is not lost on anyone. Even long distance training efforts with Dr Rupela joining over skype were always a hit, as participants could feel his earnestness in trying to engage with everyone.

When friends in Kheti Virasat Mission in Punjab were unable to crack the great mystery around wheat crop declines in organic farming and what practices to adopt to overcome this huge challenge in a state like Punjab, it was Dr Rupela, amongst all the pioneers in the organic farming movement, who took it as a personal challenge and showed his commitment to understand the workings of agro-ecology. So, he devised a wonderful action-research project, enrolled some interested farmers to try out various possible variables/factors that might help (seed varieties, different kind of irrigation and agronomy, different organic farming inputs etc.) and would make these long journeys from Hyderabad to Punjab’s villages where his experiment’s farmers would wait for him eagerly, for expert guidance and analysis of progress. He would spend his own resources wherever required and would continue his quest on finding out what was working and what was not, in a farmer’s field. It was Dr Rupela along with KVM staff and volunteers, in addition to the action research farmers, who are today providing answers to challenges of Punjab’s organic farming.

He advised all of us in a joint research project undertaken by ASHA, OFAI and IIT-Bombay’s CTARA and helped us in getting rigorous in our protocol. How can one forget the time he somehow carved out for follow up skype calls, phone calls etc. amidst his busy schedule?

If Dr Rupela ever raised his hand for an intervention in a meeting and opened his mouth (he would never butt in given that he was too polite and soft as well as disciplined), you know that something important and useful was going to get articulated and we would be all ears to listen to what his inputs were.

He had the patience for a wide variety of folks and their styles of working – he would indulge all of us in the same manner.

I remember how he meticulously captured the experiences of pioneering farmers like Subhash Sharma, with data carefully asked and recorded. He initiated another action research project in Ananthapur district centred around agro-forestry, and whenever he talked about that experience, one got a glimpse of the great scientist in action and sense of how he is collecting and analyzing data.

As a scientist, he was that rare breed who had enormous humility and ability to learn from every situation – he would keep telling again and again unhesitatingly in all fora that farmers like Subhash Sharma are his “Gurus”. His readiness in admitting that he did not know something, his eagerness to learn new things and his amazing humility with regard to the enormous knowledge that he carried are rarities amongst human beings, leave alone scientists.

He was so disciplined and organized, and there was much to learn from that. He could go back to old notebooks and verify discussions and data fairly easily.

He was a great believer in alternative knowledge systems – in agriculture as well as healthcare systems. He was a careful eater and if you ever shared a room with him or walked into his room in the morning, you would know that he would do his yoga and then carefully peel the various fruits and vegetables that he would carry with him, and eat some himself and also feed others generously.

The last time several of us got to interact with him was after he was appointed a Member of the Task Force on Organic Farming by the Ministry of Agriculture, Govt of India. In that meeting too, his precise queries and his summing up of different presentations, by drawing out “take-aways” for the sake of his entire Task Force team were noteworthy.

For several days now, many of us were in despair once we heard that he was in a critical condition after his malignant fibrous histiocytoma has undergone metastasis and spread to different parts of his body – his lungs were reportedly worst affected, and very soon, breathing became difficult. One was hoping against hope that a wonderful man like him will be able to fight back this dreaded disease called cancer which seems to be spreading in our society and taking our best people unfortunately.

It is noteworthy that all the people who knew him either quite well or from a distance, have one consistent description for Dr Rupela: “what a lovely human being he is”! Indeed, how can anyone miss the fact that he was a lovely human being – great integrity, enormous commitment, clarity of purpose, courage of conviction, most pleasant demeanour, deep discipline and high degree of orderly work, and most importantly, an agriculture scientist who always put the farmer first.

It is with tears and utter sadness at the enormous loss that we are all experiencing that we say goodbye to Dr O P Rupela. This is indeed a loss to the nation.

He will continue to be our guide and inspiration in our work, and we hope to imbibe his values so that we may fulfill our collective dream of ecological agriculture in India, led by empowered farmers. Our greatest tribute to him would be by taking forward the mission with strength, and we need to do so.